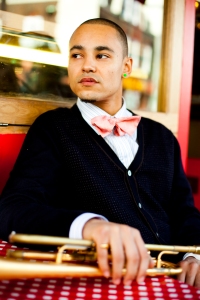 FOR Jay Phelps, it really don’t mean a thing if it ain’t got the swing. In fact it may be hard to find someone who has lived their life more acutely in tune with Duke Ellington’s mantra.

After all, Phelps is the guy who walked out of perhaps the biggestUKjazz band of his generation, at the peak of its powers, simply because it didn’t groove enough.

That band was Empirical, a sharp-dressed quintet of classy young players in slick suits, who crucially sounded as good as they looked. Their eponymous debut record overflowed with ambitious post-bop themes and stellar improvisations, earning the band the most coveted awards, including both Jazzwise and Mojo’s Jazz Album of the Year awards in 2007.

But a year later Phelps mysteriously quit, prompting a breakdown of the group he co-founded, which also saw pianist Kit Downes – who played Dorking’s Watermill Club in April – leave to pave his own way.

“When I left Empirical I had to reassess my whole life, it was such a big part of my life” says Phelps

“I miss the element of one for all and all for one, what I don’t miss is that sometimes you can butt heads.”

While Downes struck out early with 2009’s Golden – which garnered him a Mercury Music Prize nomination alongside the likes of Dizzee Rascal and Paul Weller – Phelps chose to bide his time, finally coming up trumps with solo debut Jay Walkin’ late last year. A joyful homage to the great small group bop of the fifties, the LP weighs in with a healthy mix of seasoned pros – including Jay’s father-in-law Dennis Rollins – and rising stars like saxophonist Shabaka Hutchings and Jay’s flatmate, and Ronnie Scott’s house band stalwart, singer Michael Mwenso.

“Whatever I do now right now has to be under the swing-blues umbrella,” explains Jay.

“It should be a very wide umbrella, but it’s getting smaller every day – and is surrounded by showers of modern raindrops that just don’t swing at all.”

While Phelps refused to rule out an Empirical reunion the Canadian expat shows no signs of turning his back on tradition anytime soon. As his former band mates continue to deconstruct the works of avant-garde saxophonist Eric Dolphy, Phelps’ next project is a big band group, debuting at the Canary Wharf Jazz Festival in August.

“All the great musicians have always been involved in big bands,” added Jay, “it’s the symphony orchestra of jazz.”

It will be a slimmer outfit hitting the road next month though, with Jay’s touring sextet trimmed down do a quartet, leaving us without a vocal or second horn, but giving Phelps plenty of space to spread out – and swing.

One thought on “Swing when you’re winning: Jay Phelps gets his groove”